April 12, 2016
So far we have talked about Our Lord Jesus' Heroic Minute, and the Proverbs 31 woman's Heroic Minute.  Today, I'd like to turn our attention to one of favorite saint's Heroic Minute: Saint John Paul II.

If anyone exemplified living out the Heroic Minute it was JPII. Cardinal Stanislaw Dziwisz, who served as the Pope's personal secretary, devotes an entire chapter in his memoirs A Life with Karol: My Forty-Year Friendship with the Man Who Became Pope

to the Holy Father's daily routine. He notes that:


"John Paul II was a perfectionist, because he always wanted to get as much as he could out of the time available. So he would meticulously plan out the day's activities: prayer, work, meetings, meals (which gave him a chance to talk with guests), and rest."

He goes on to describe the Pope's morning routine:


"Anyway, the Holy Father used to begin his day pretty early. He would get up at 5:30, wash up, and go to the chapel for morning adoration, Lauds and meditation. Mass would be at 7:00AM..." 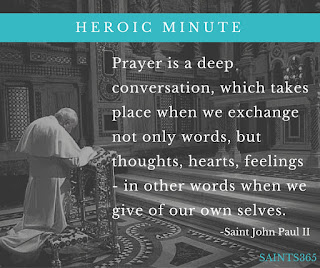 Those who witnessed Saint John Paul II praying in his chapel in the morning before Mass saw a man totally absorbed, seemingly oblivious to the world around him. His prayer involved every ounce of his being: body, soul, mind and heart. Cardinal Dziwisz summarizes his prayer life saying:


"...there was nothing sanctimonious about any of this. He was in love with God. He lived on God. And every day, he would start over again."

It was this heroism and total devotion to his prayer time, even during times of illness, injury and suffering, that propelled him to the heights of holiness and made him a compelling witness to the world of a life lived in complete surrender to the Lord.

Let us ask our beloved "Papa" for his intercession to help us as we try and live out the Heroic Minute in our daily lives. May this Heroic Minute lead us into a deeper relationship with the Lord and may that relationship fill us the courage and the zeal to proclaim this good news to our hurting and broken world as Saint John Paul II did.


Please note that this post contains Affiliate Links - which basically means that if you click and shop through any of the Amazon, my domestic church will receive a small commission. Woo-hoo! We greatly appreciate the support!

January 28, 2015
I recently stumbled upon these two prayers of St. Thomas Aquinas to be said before and after receiving Holy Communion. As with much of the Angelic Doctor's writings, his words have the ability to stir one's heart to more fully experience the depths of the mysteries he is writing about.  What a gift to the church he was and continues to be. Prayer Before Communion Almighty and Eternal God, behold I come to the sacrament of Your only-begotten Son,  our Lord Jesus Christ. As one sick I come to the Physician of life; unclean, to the Fountain of mercy; blind, to the Light of eternal splendor; poor and needy to the Lord of heaven and earth. Therefore, I beg of You, through Your infinite mercy and generosity, heal my weakness, wash my uncleanness, give light to my blindness, enrich my poverty, and clothe my nakedness. May I thus receive the Bread of Angels, the King of Kings, the Lord of Lords, with such reverence and humility, contrition and devotion, purity and faith, purpo
9 comments
Read more

November 11, 2015
Max Lucado's children's book You Are Special is a favorite of mine and a beautiful story with many facets to it and much to be learned from it. It is a sad story of judgment; of pride and slavery; of sin and brokenness.  It is also a beautiful story of witness and hope - a story of intercession and prayer. Ultimately it is a story of love and the heart of God. Below are 7 lessons from the story that I shared a few years back with a women's group at our parish. Please note that I will include the main plot line as I go, so you should be able to follow along even if you have not read the book.  I do highly recommend that you pick up a copy for yourself  - it is a story whose message is ageless and timeless. --- 1 --- This is a story of judgement. The story opens with us witnessing a typical day in the life of  the wooden Wemmicks. These gangly wooden people spend all their time furiously giving each other grey dots or golden stars. The grey dots are placed on Wemmick
13 comments
Read more