November 19, 2015
Memories of my Grandmother's house powerfully evoke all five of my senses. I can still hear the creak of the linoleum steps beneath my feet as I would ascend to her second floor apartment, the smell of simmering marinara sauce or some other Italian comfort food wafting to meet my nose.  Her greeting was always the same: a tight, warm embrace in her sturdy Sicilian arms followed by the lilt of her broken English: "Deborina...how's my beautiful granddaughter".  And the tastes... Dinner at Grandma's was always a feast for the palate.  She could transform a head of iceburg lettuce, a slab of mozzarella and a dash of oil and vinegar into the most magically delicious salad I have ever eaten.

I have the greatest memories of the days and nights spent as a child at her home: from sleepovers when I was allowed to stay up late and watch episodes of the Love Boat and Fantasy Island while she snored on the couch next to me to the sounds and smells of her frying meatballs on Sunday mornings. As a teen, when my parents drove me nuts for no other reason than they were my parents, I would escape to my Grandmother's house. All my fittings for my wedding dress were done with me perched precariously atop her kitchen table, and her adept seamstress hands pinning and repining. When I finally had my own children, I soaked up her parenting wisdom (my favorite quote: "The mother is the doctor.")  and delighted in the love she showered on her great-grandchildren.

Nothing in my Grandmother's house ever changed. Growing up on a small, remote island off the coast of Sicily and arriving in the United States as an immigrant in the midst of the Great Depression gave her a natural detachment from material things. It wasn't that she didn't like nice things - her home was meticulously, albeit simply, furnished. It was just that she saw no reason to replace something that was still perfectly useful. The result was that her home remained exactly the same year after year, until she passed away at nearly 99 years old. It was that unchanging quality that I missed the most after her death. Life at Grandma's house was like her love- stable, steady, rock-solid and unchanging.

I was well into my forties when she died, but her death rocked me as if I were a child. Reminders from well-meaning friends of the length and beauty of her life offered me little consolation. I missed her presence in my life: I missed her hugs, I missed her voice, I missed her meatballs and I missed the home that I considered one of the happiest places on earth. 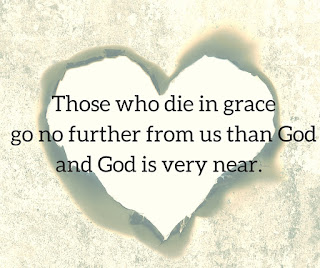 A few months after her death I sat in my Spiritual Director's office and cried my heart out to him. He patiently listened as I sobbed though my grief. When he finally spoke, he gently suggested that I was looking for my grandmother in all the wrong places. Instead of longing for her presence in the past, in the flesh, in her home - he proposed that I seek her instead where she was to be found: in the Lord, in the Spirit, in heaven. He asked me to pray for the grace to release her in this life, so that I might discover her in a new way.  Finally, he gave me this quote, which has sustained and consoled me ever since: "Those who die in grace go no further from us than God, and God is very near."

I turned over that quote in my mind for many months. I have come to appreciate the truth in its words. I thought that what I missed the most about my Grandmother was the permanence of her home and all that represented to me. What I have discovered is that her home was just a dwelling for her love, and that remains alive, well and exactly as it always was: stable, steady, rock-solid and unchanging.

December 02, 2015
On December 3, the Church celebrates the feast of St. Francis Xavier, patron saint of missionaries. St. Francis Xavier was a Jesuit missionary best known for the thousands of people he brought to conversion and Baptism in India and Japan. In a letter he wrote from the missionary fields in India, he described the amount of people he Baptized in vivid language: "As to the numbers who become Christians, you may understand them from this, that it often happens to me to be hardly able to use my hands from the fatigue of baptizing: often in a single day I have baptized whole villages. Sometimes I have lost my voice and strength altogether with repeating again and again the Credo and the other forms." Here's an interesting fact about St. Francis Xavier that I found in Saints for Young Readers for Every Day, Vol. 2: July-December  : Pope Gregory XV canonized St. Francis Xavier in 1622 along with Ignatius of Loyola, Teresa of Avila, Philip Neri and Isidore the Farmer.  W
13 comments
Read more