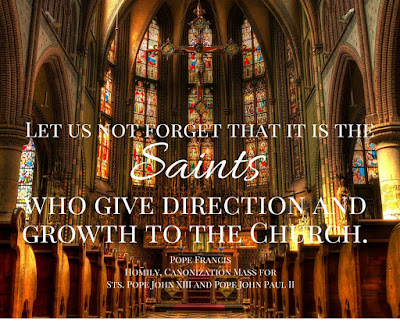 The Church celebrates the 2nd Anniversary of the Canonizations of Sts. Pope John Paul II and Pope John XIII - here are some of my reflections on that beautiful Mass.


4:00AM. I grimaced when the alarm went off. I'm an early riser, generally up and at my desk by 5:30AM, but 4:00AM on a Sunday is a bit extreme, even for me. However, as a JPII kid (he became Pope when I was 11 years old), I felt compelled to watch his canonization live, much in the same way that I rose in the middle of the night 9 years ago to watch his funeral Mass. That day was one of great sadness at the temporal loss of a man who I viewed as my spiritual Papa - the day of his canonization, however, is a day of great joy and victory as our beloved Papa, along with Pope John XXIII, is recognized by the church as one of her great saints!

Here are some of the parts of the canonization Mass that touched me the most.

Pope Francis Greeting Pope Benedict
The warm greeting exchanged by Pope Francis and Pope Emeritus Benedict XVI under the banners of the soon-to-be canonized Pope John Paul II and Pope John XXIII, and just beyond the statue of St. Peter spoke volumes to me as I watched. It was a noteworthy and historical moment for so two major reasons:
For me, it was far more than just the historical novelty and uniqueness of today's celebration. Their embrace was a vivid demonstration of the great blessing of Apostolic succession that the Catholic Church exclusively enjoys. The grace of continuity of teaching and leadership in the church was tangibly on display today as the past 50 years of the papacy were spiritually and physically joined together in unity at the Basilica dedicated to the first Pope.

Proclamation of Sainthood
The following are the official words of Canonization proclaimed by Pope Francis:


“For the honour of the Blessed Trinity, the exaltation of the Catholic faith and the increase of the Christian life, by the authority of our Lord Jesus Christ, and of the Holy Apostles Peter and Paul, and our own, after due deliberation and frequent prayer for divine assistance, and having sought the counsel of many of our brother Bishops, we declare and define Blessed John XXIII and John Paul II be Saints and we enroll them among the Saints, decreeing that they are to be venerated as such by the whole Church. In the name of the Father, and of the Son, and of the Holy Spirit.”

There is such richness in this brief formula of canonization: it highlights the reason the church makes saints; the authority by which she is able to elevate a person to sainthood, and the process by which sainthood is determined. Yet the simplicity of the words do not diminish their power and that power could be palpably felt as the Pope proclaimed them.

Pope Francis' Homily
In his homily at the Canonization Mass, Pope Francis highlighted the two new saints' docility to the Holy Spirit and stressed that it is through saints that the church grows saying,


"John XXIII and John Paul II cooperated with the Holy Spirit in renewing and updating the Church in keeping with her pristine features, those features which the saints have given her throughout the centuries. Let us not forget that it is the saints who give direction and growth to the Church."

He went on to describe Saint John XXIII's "great service to the Church" as being that of  "the pope of openness to the Spirit" and Saint John Paul II as being the "pope of the family."

As a wife and mother, the Holy Father's words describing the example of Saint John XXIII and Saint John Paul II deeply resonated in my heart as the recipe for living out life in our family's domestic church -a recipe of trust in the Lord and cooperation with the direction of the Holy Spirit.

Reception of Holy Communion
The opening lines of Ecclesia de Eucharistia, Pope John Paul II's final encyclical state: "The Church draws her life from the Eucharist." Watching the distribution of Holy Communion at the Canonization Mass was a moving demonstration of this truth. Hundreds of priests went forward into the vast crowds gathered for Mass, bearing with them the Body, Blood, Soul and Divinity of Jesus Christ, truly present in the Eucharist. In what was a remarkably silent and reverent crowd, the faithful came forward to "draw their life" by receiving the Body and Blood of the Lord. Watching on my computer at home, I felt united to them in the reality of that same Eucharist, which I myself received at Mass later that day, and am reminded of the words of Cardinal de Lubac: "The church produces the Eucharist, but the Eucharist produces the Church." (Splendor of the Church, 133)


I'm participating in Worth Revisit Wednesday with this post - head on over to visit hosts Elizabeth at Theology is a Verb and Allison at Reconciled to You for more faith-filled Catholic posts!